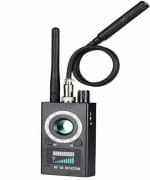 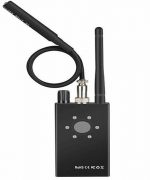 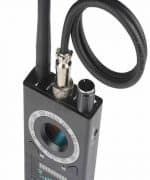 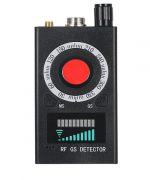 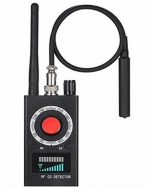 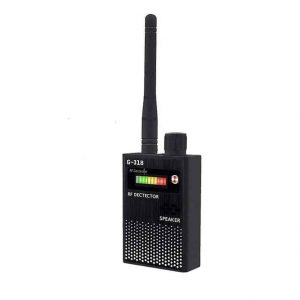 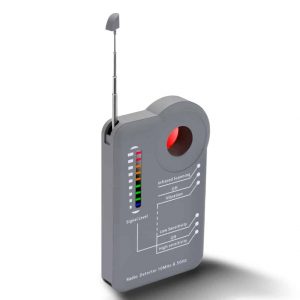 The EMF bug detector & spy scanner gives you three functions in one detector.

The EMF bug detector benefits from twin antennas, standard RF and a radio magnetic probe for detection of electromagnetic fields. The added spy camera scanner offers an infrared strobe function for spotting hidden pinhole spy cameras. The detector gives you so much for the price, & incorporates some excellent detection properties usually found in more advanced systems.

Spot hidden spy cameras whether they are transmitting or dormant, with the infrared system. An electromagnetic probe searches for magnetic fields often used by vehicle tracking devices.

An electromagnetic field probe gives this bug detector a significant advantage over conventional bug detectors with the magnetic radio probe. With the EMF probe, you can seek out dormant bugs that are not transmitting. The spy camera lens finder is built in too, so you can scan for hidden camera lenses.

One of the problematic scenarios you face when looking for radio transmitters. Is finding devices that may not be transmitting at the time you are checking for them. This low-cost EMF spy scanner comes with quite a large bandwidth as well as a lens detector to highlight pinhole cameras.

One particular function of this device is its ability to detect low-level radiation emitted from all electronic devices. In short, this means you will be able to use the supplied EMF probe capable of detecting spy products that are not actively sending a signal.

Although the performance of this device is reasonable in comparison to most professional tools, there are some desirable benefits, not to mention the price.

Detect hidden bugs both GSM and RF based – Detect camera lenses wired or wireless – Acknowledge spy cameras with infrared. This budget bug detector offers the user, so much for a low price, it has go to be one of the best budget bug detectors on the market.