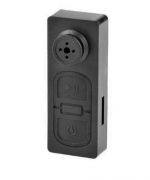 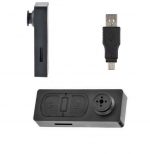 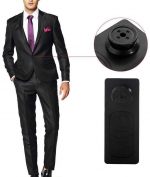 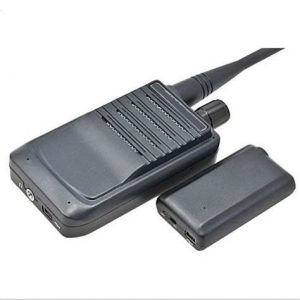 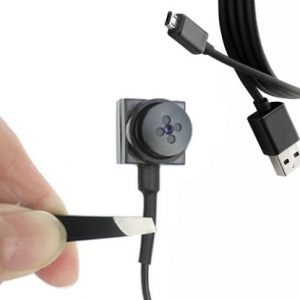 The pinhole spy camera lens is in the shirt button.

The button spy camera must be the lowest cost spy camera you will find, that’s worth buying. Self-contained, the built-in video and audio capture and recorded on the device as the recording is taking place. The storage location is on the Micro SD card fitted in the side perfect for record and playback at any time.

Our button pinhole spy camera hides the lens in the centre of the Button. The spy camera blends into many different types of clothing, assisting you in masking its secret camera lens. The camera records the video and audio while storing it on a micro SD card fitted in the side of the unit. The pinhole spy camera is entirely self-contained, so there’s no need to run wires over your body or under your clothes. It is possibly one of the best budget cameras you will find for covert filming.

The spy camera has a built-in rechargeable battery that connects to the charger or computer for file transfer.
Recharging the battery is easy with a standard micro USB power lead or phone charger. Or with the power lead that comes with the device. You can also charge the camera from your computer USB port should you prefer. The Performance will rival most pro camera products, offering HD video recording that’s crystal clear. It also has audio through the built-in spy microphone.

If you need to record without other being suspicious or you’re a mystery shopper, then this product is for you. Small and compact, the tiny device will be perfect for secret filming, and it won’t be a disaster if it’s lost or broken, due to the purchase price. Whether you’re an experienced mystery shopper or need to film covertly, this little spy gadget will assist you.

Why spend lots of money on expensive video cameras when you can use this button camera and get just about the same results if you lose the camera or break it its not the end of the world. As replacing the device is inexpensive, unlike some covert cameras on the market.